Hi friends, in today’s article we are going to know about consumer equilibrium with the help of indifference curve. So let’s discuss in details.

Explain Consumer Equilibrium with the help of Indifference Curve

A consumer is said to be in equilibrium when he gets maximum satisfaction out of his money income and he has no tendency to make any change in his existing bundles of commodity. When the consumer reaches such a point he will have no urge to increase or decrease the purchase of any commodity.

• Consumer’s income and prices of the commodities are given.

• Commodities are homogeneous and divisible.

• Consumer has a given indifference map which shows scale of preference of various bundles of two commodities, say X and Y.

(i) MRSxy should be equal to price ratio of X and Y, that is MRSxy = Px/Py

Given the scale of preference of the consumer it is possible to determine his indifference map. The slope of indifference curve measure the MRS of X for Y. MRS explain the ratio of sacrificed amount of Y good in order to get X good. It goes on diminishing with each additional combination.

The slope of price line measures the ratio of prices of two commodities, X and Y. Thus, the first order condition for consumer’s equilibrium is that the slope of budget line is equal to the slope of indifference curve. This is shown in the following figure – 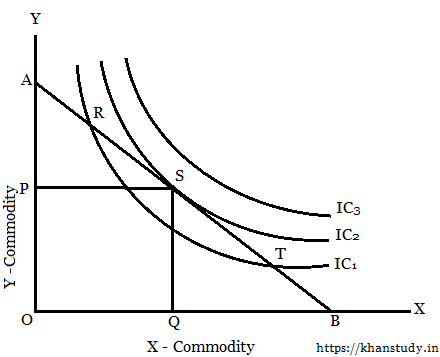 The IC1 cuts the price line AB at R and T. Consumer can not doubt buy these combinations but here slopes of price line and IC1 are not equal or MRSxy is not equal to the price ratio of the consumer will have a tendency to alter his purchase. So, R and T do not represent the points of equilibrium of consumer.

The price line AB is tangent to IC2 at S. So, S is the point of consumer’s equilibrium where he buys OQ units of X and OP units of Y. 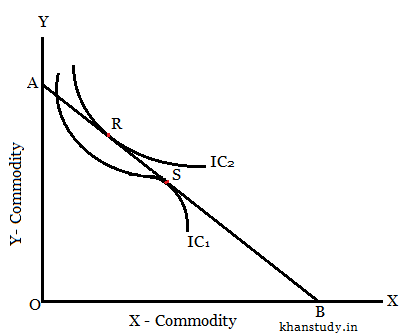 In the figure, the price line AB is tangent to IC1 at point S. Although the first condition for equilibrium is satisfied at this point, yet this is not the position of stable equilibrium of the consumer. At point S, the indifference curve IC1 is concave to the origin and MRS of X and Y has been increasing.

In such a situation, consumer has a tendency to prefer the purposes of more unit of X. So, consumer can not be regarded in equilibrium at point S. The stable equilibrium of the consumer is determined at point R where price line AB is tangent to IC2 and MRS of X for Y is equal to the price ratio of X and Y.

So friends, this was the concept of consumer equilibrium with the help of indifference curve. Hope you get the full details about it and hope you like this article.