The LAC curve is based on the assumption that in the long run a firm scale a number of alternatives in regard to the scale of operations. We have assumed that technologically there are only three sizes of plants, which are shown in the following figure – 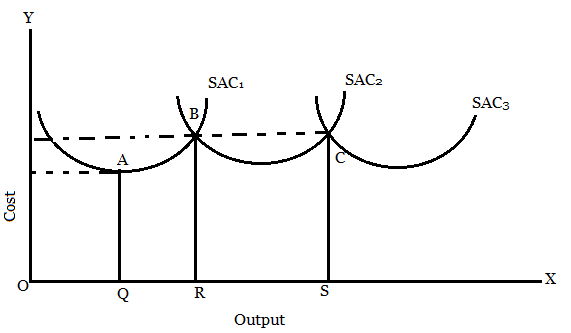 In the above figure, SAC1 refers to the short run average cost curve for the smallest plant, SAC2 is for medium size plant and SAC3 is relation for the large size plant. In the short period, when the output demanded is OQ the firm will choose the smallest size plant.

But for OR output firm will choose medium plant and for output OS the firm will choose large size plant. In the long run, the firm can build a plant whose size leads to the lowest average cost for any given output.

In figure (2), we have drawn a smooth continuous curve connecting the lowest points of a member of SAC curves and have called it as the LAC curve. It is the locus of points representing the least unit cost of producing different output. 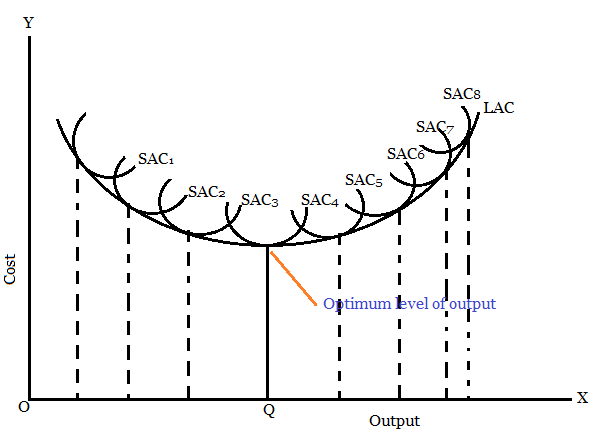 Therefore, the LAC can be defined as the lowest possible average cost of producing any output when the management has adequate time to make all desirable changes and adjustments. The LAC curve is sometimes called the normal cost curve or the planning curve of a firm.

Since factors are indivisible and variable in the long run, the LAC is ‘U’ shaped. The LAC is also known as ‘envelop’ curve. Because it envelops all the SAC curves.

Normally, a firm has some size of plant and a corresponding SAC curve. But over a period of time, the firm can move from one plant size to another. It passes from one SAC curve to another finding a different one at each point on the LAC curve.

What is the Full form of LAC?

What is the full form of SAC?

So friends, this was the derivation of Long-run average cost curve. Hope you get the full details about it and hope you like this article.

• Relationship between Investment and Rate of Interest