Hi friends, in today’s article we are going to know about the attributes or characteristics or properties of indifference curve. So let’s discuss in details.

What are the properties of Indifference curve?

• Indifference Curves are Negatively Sloped – The indifference curves must slope downward from left to right. As the consumer increases the consumption of X commodity, he has to give up or sacrificed certain units of Y commodity in order to maintain the same level of satisfaction. 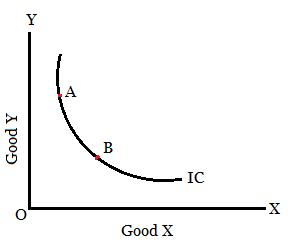 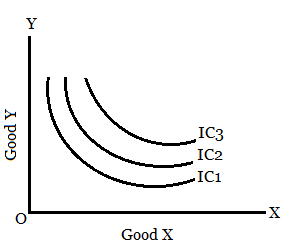 • Indifference curves are Convex to the Origin 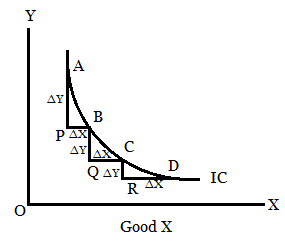 In the above diagram, the customer movements or the consumer moves from A to B to C to D, the willingness to substitute good X for good Y diminishes.. The slope of IC is negative.

• If the indifference  curve is concave, MRSxy increases. It violets the fundamental feature of consumer behaviour.

• If commodities are almost perfect substitutes then MRSxy remains constant. In such cases the indifference curve is a straight line at an angle of 45° with either axis.

• If two commodities are perfect complements, the indifference curve will have a right angle.

In reality, commodities aren’t perfect substitutes or ideal enhances to every or each other. Therefore MRSxy usually diminishes.

• Indifference Curves can not intersect each Other

In order to prove this, it may be supposed that two indifference curves IC1 and IC2 intersect each other at point A of the following figure – 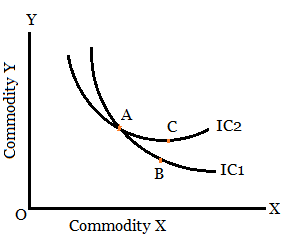 Now, A and B are two combinations on the same indifference curve IC1.

Again, A and C are the two combinations who is lie on the same indifference curve IC2.

Combination C should give grater satisfaction than combination B. This contradiction has occurred because our supposition was wrong and two indifference curves can not cut each other. 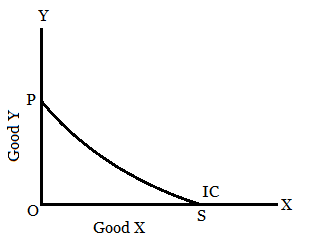 What is Marginal Rate of Substitution?

The Marginal Rate of Substitution is the fee at which the customer have to sacrifice units of one commodity to gain one extra unit of another commodity.

What is Indifference Curve?

Indifference curve refers to the graphical representation of various alternative combinations or bundles of two goods among which the consumer is indifferent.

So friends, this was the attributes or characteristics or properties of indifference curve. Hope you get the full details about it and hope you like this article.