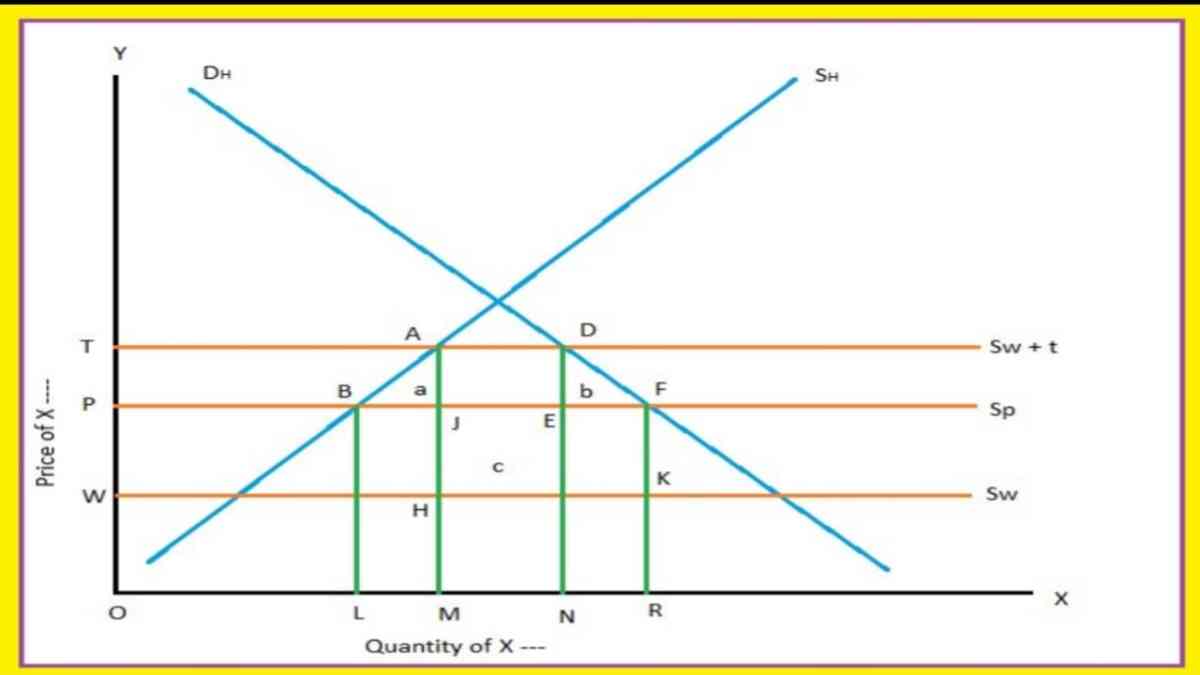 The partial equilibrium analysis of customs union was developed by Viner in terms of trade creation and trade diversion.

Friends, in today’s article we are going to know about Partial Equilibrium Analysis (Trade Creation and Trade diversion). So let’s discuss in details. The analysis is based on following assumption –

(i) There are two countries. Say home country (H) and partner country (P). They from customs union.

(ii) There is another country which is called rest of the world (W).

(iii) There is only one good say X.

(iv) There is no transport cost.

(vi) There is free and unrestricted trade between H and P.

From the figure it is clear to us that at price OT country H consumes ON, where MN quantity of X imported from W. Country H gets a tariff revenue equal to the area ADKH. 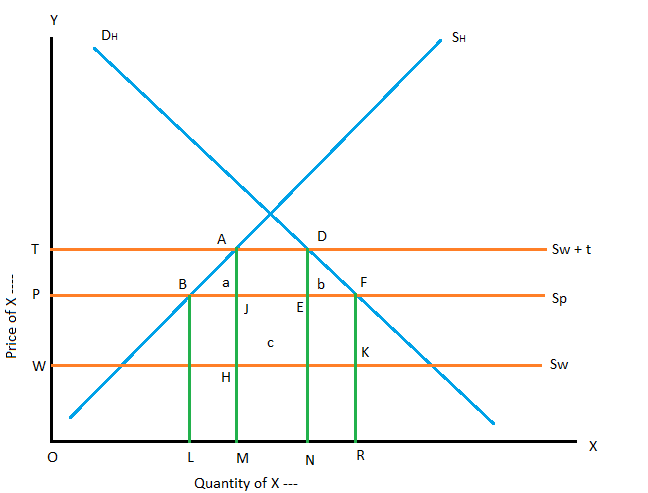 Suppose country’s H forms a custom union with a country called partner country from W. Thus now country will import good X duty free from country P only and none from country A. This provides following trade creation effects of the customs union for country H.

The production and consumption effects of the trade creation lead to the welfare gain effect for country H. Before customs union, LM was being produced by H at a total cost given by the area AMLB under the supply curve SH.

After customs union LM is imported from country P at a lower total cost given by the area JMLB under the supply curve Sp. Thus AMLB – JMLB = AJB is the production gain effect.

Before customs union the home country consumes ON quantity at price OT. But after customs union it consumes OR at price OP. By consuming NR, more quantity of X the total utility derived by H equal to the area DFRN under the demand curve DH.

Trade diversion occurs when with the abolition of tariff on the partner country, the home country imports the product from the high cost partner country instead of from the lower cost rest of the world country.

It has two aspects – 1st an increase in the cost of ggod X and Secondly a close in consumer’s surplus. The trade diversion effect is explained in the above figure.

But the total cost to country W for exporting this quantity is HKNM. Thus ADNM – HKNM = ADKH is the tariff revenue of the government.

The net welfare effect can be measured on the basis of welfare gain and welfare loss.

Now, If (a+b) = c, there is net gain nor net loss in country H’s welfare from customs union.

If (a+b) > c, there is net gain in country H’s welfare from customs union.

If (a+b) < c, there is net loss in country H’s welfare from customs union.

So friends, this was the concept of Partial Equilibrium Analysis. Hope you get the full details about it and hope you like this article.