What is Capital Output Ratio? 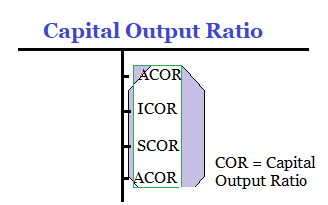 If in an economy the COR is 3:1, it means that 3 units of capital are required to produce 1 unit of output. So, the capital co-efficient will be 3.

What are the different types of Capital Output Ratio (COR)?

There are various types of COR depending on the context or situation in which this ratio is used. Most important types are discussed below –

• Average Capital Output Ratio (ACOR) – It is defined as the ratio of existing capital stock to the aggregate level of current national output. Thus ACOR = K/Y

• Sectoral Capital Output Ratio (SCOR) – SCOR is defined as the ratio of sectoral capital investment to sectoral output. Thus, k1 =I1/Y1, where k1 is the COR in sector I1 is the investment in sector 1, and Y1 is output in that sector.

• Aggregate or Countrywide Capital Output Ratio (ACOR) – ACOR is an average of all the sectoral capital output ratios of the economy.

• Net Capital Output Ratio – The term Net COR is the ratio which cover only capital caused changes in output that is which are net of any changes in other factors like trained manpower, entrepreneurship, etc.

• Adjusted Capital Output Ratio – In adjusted capital output ratio is the additions to capital are accompanied by changes in other output yielding variables also.

What are the factors affecting the Capital Output Ratio?

The size of COR in an economy basically depends upon the size of output that can be obtained by a particular capital output.

The larger the size of output that can be obtained by the given input, the lower will be COR. Various other factors affecting COR are discussed below –

• Urbanization – The migration of rural population to urban areas necessitates larger investment in house building industry, health and sanitation activities and the consequence is a high COR.

• Composition of Investment – If in a country heavy investments are made in public works like roads, schools, colleges, railways, hospitals, the COR will be high. If the investment is made in agriculture and small scale cottage industries, then COR is low.

• Spread of Education – The general and technical efficiency of the working people can be increased by the spread of education and it leads to better use of capital equipment due to which COR falls.

The COR plays a vital role in development of planning. It is an important tool in the hands of the planners through which they can estimate the capital requirements of the economy. The use of COR are as follows –

The main limitations of the concept of COR are as under –

• Lack of Reliable Data – In the words of planning commission, “Precise calculations of the COR can be made only in the light of concrete programmes of development and technical data regarding costs and output”. But the accurate data is not available – in underdeveloped countries.

• COR does not Remain Constant – The COR does not remain constant or same over a long period of time and hence it can not be used effectively for forward planning.

• Not Applicable in Depression – During depression, all increases in capital are followed by a fall in output and thus this concept of COR becomes useless in such a situation.

• Ignores Human Capital – The COR also fails to tell us anything about investment in human capital in the form of social overheads needed to achieve a certain rate of economic growth.

• Price Fluctuations – The fluctuations prices of capital as well as output impose a serious limitation on the usefulness of COR.

• Over Emphasis on Capital – The concept of COR lays more emphasis on the rate of capital in economic development.

So friends, this was the concept of COR. Hope you get the full details about it and hope you like this article.