Hi friends, in today’s article we are going to know about Ricardo the emergence of ‘Stationary State’. So let’s discuss in details.

Stationary state refers to a situation in which entrepreneurs will have no tendency either to increase or decrease output. It implies that development variables remain unchanged /unaltered. Ricardo has explained the stationary state in terms of falling rate of profit.

He has expressed the views that capitalist economies would end up in a stationary state, with no growth, also owing to diminishing returns in agriculture. According to Ricardo, growth and development is a function of capital accumulation, and capital accumulation depends on reinvested profits.

However, profits are squeezed between subsistence wages and the payments of rent to landlords, which increases when the price of food rises. But as the society progresses, the share of profit starts offevolved to decline.

The process of growing rents and falling profits keeps until the output from the marginal land simply covers the wages of labour employed and earnings are zero.

There is no accumulation of capital, no boom in population and wage rate however rent is extraordinarily high and there’s monetary stagnation. Following Figure illustrates the model. 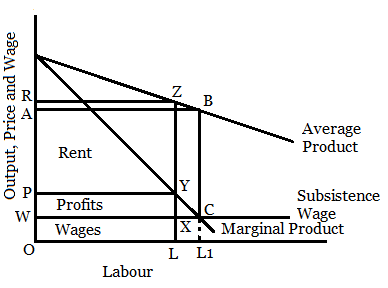 Employment of labour has been shown on horizontal axis and output, price and wage have been shown on vertical axis. When OL amount of labour is employed, the total output is ORZI, Rent is determined by the difference between average and marginal product of labour working on land, and it is shown by the area PRZY.

Wages are equal to OWXL. Profit is determined by subtracting rent and wages from total output, and it is equal to WPYX. As output increases, the marginal product of labour falls to the subsistence wage (C) and profits disappear. Thus when wages rise, profits fall to zero, capital accumulation stops and the economy enters in the stationary state. 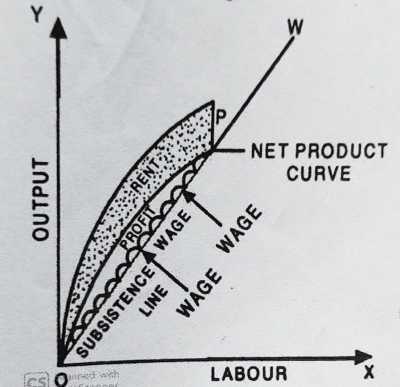 With the increase in capital accumulation, profits and wages tend to increase and the rise in wages brings about a decline in profits. The decline in profits will continue till a stage comes when the net product curve intersects the wage line OW at P.

At this point, wages are equal to net product and the profit is zero. Any disturbance to the right of point P, will make the net product less than wage level which is impossible. So P is the point at, which economy is in a stationary state.

Mention the characteristics of Stationary State

Adam smith believed that the progressive state was not endless. This process of development ultimately leads an economy into a stationary state. The stationary state may be defined as the state of full employment.

It is the condition when the growth of the economy becomes fully stagnant. The important characteristics of stationary state are given below.

So friends, this was the concept of Stationary state. Hope you get the full details about it and hope you like this article.

• Types of division of labour | Division of Labour