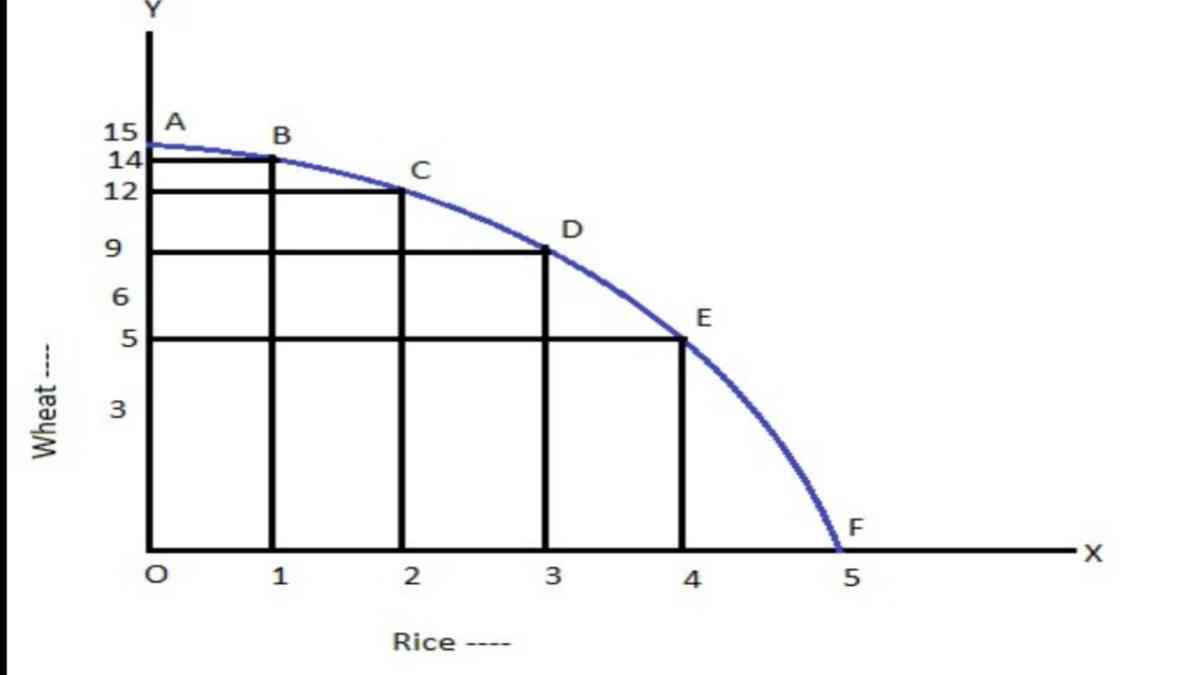 PPC means Production Possibilities Curve. Friends, in today’s article we are going to know about PPC. So let’s discuss in details.

What is Production Possibilities Curve?

A production possibilities curve shows that with given resources an increase in production of one good necessitated the reduction in the amount of the other good.

Thus PPC or production possibilities curve means graphically presentation of possible combinations of two goods that can be produced with given resources and technology.

The Production Possibilities Curve is also called transformation curve because in moving from one point to another. Here one good is transformed into another not physically but by transferring resources from one use to another.

The PPC is based on the following grounds –

• There is full employment of resources.

• There is no change of technology.

• There is short period time.

• The supplies of factors are fixed but these can be transferred from one use to another.

• With the given resources only two goods say, X and Y can be produced.

On the basis of the the above assumptions the derivation of production possibility curve can be explained with the help of following table and diagram.

The table shows an imaginary possibilities of rice and wheat. If the economy uses all its resources to produce only rice, then maximum 5 units of rice can produced.

In the following figure, OX axis represents rice and OY axis we represents wheat. In fact, the figure is a graphical presentation of the above table, which is called Production Possibility Schedule.

There also some points such as B, C, D, E, etc. which show all the different combinations of rice and wheat. If we connect all these points we have obtained a curve which is known as Production Possibility Curve (PPC). 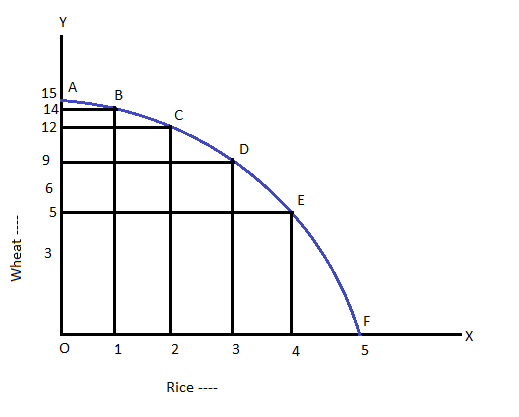 The PPC or Production Possibilities Curve shows the maximum amounts of rice and wheat that can be obtained by an economy by utilizing all its resources and given technology.

It shows the different amounts of any two commodities which are available in economy in a particular period.

The features of PPC is given in the following grounds-

(i) Usually PPC slopes downward from left to right.

(ii) Production Possibility Curve concave to the origin due to the increasing marginal opportunity cost.

The uses of PPC are given below-

• PPC is used to explain efficient selection of goods to be produced, efficient allocation of resources in the production and efficient allotment of the goods produced among consumers.

• PPC helps us to explaining how an economy grows.

• PPC informs us about the basic facts of human life.

So friends, this was the concept of PPC. Hope you get the full details about it and hope you like this article.