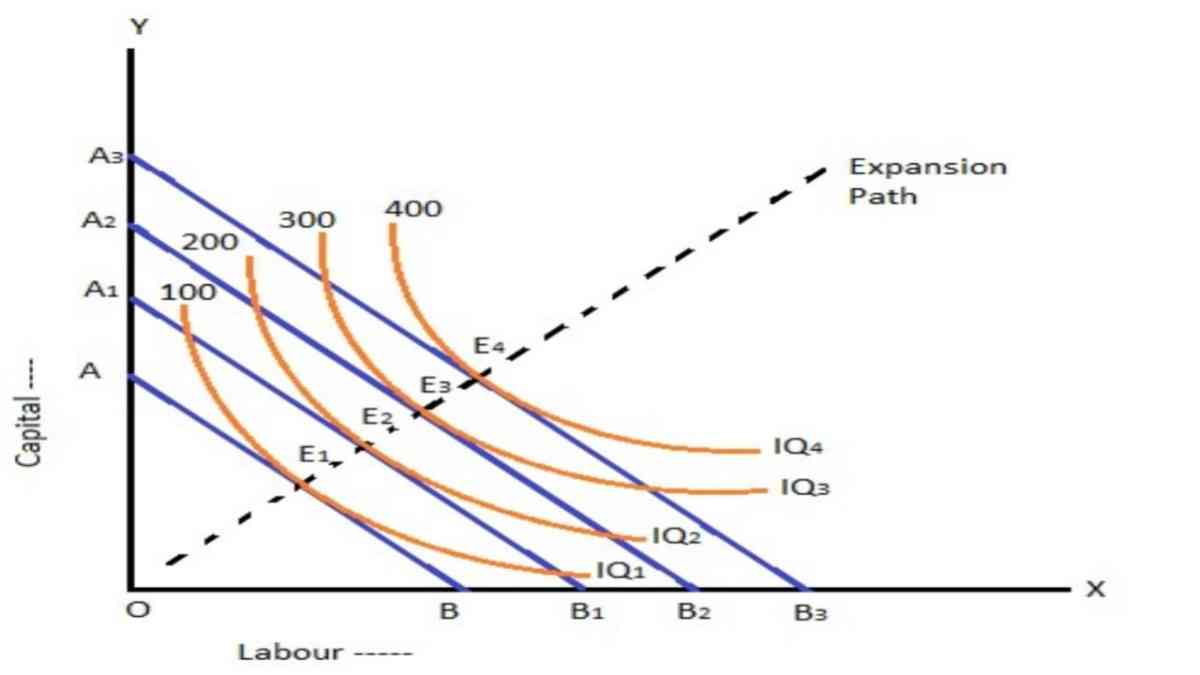 What is Expansion Path?

According to Stonier and Haque, “Expansion path is that line which reflects least cost method of producing different levels of output”. So, expansion path is the locus of all cost minimizing combinations inputs.

Explain the Derivation of Expansion Path?

According to Stonier and Haque, “Expansion path is that line which reflects least cost method of producing different levels of output”. So, expansion path is the locus of points of tangency between the iso-cost lines and the isoquants.

When total outlay increases but factor price remain constant. It can be derived with the help of equal product curve and iso-cost lines. A rational firm minimizes cost by choosing the least cost combination of inputs.

For iso-cost lines, AB, A1B1, A2B2 and A3B3 and IQ1, IQ2, IQ3 and IQ4 isoquants are drawn. Each iso-cost lines represents different levels of total cost and each lines are parallel to one another indicating that prices of the two factors remain the same or constant. 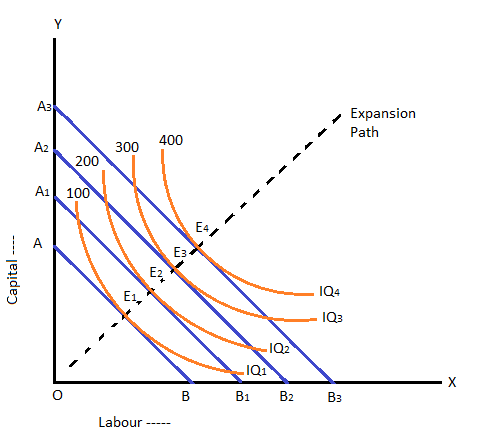 The initial iso-cost line AB is tangent to isoquant IQ1 at point E1 which is the initial equilibrium of the firm. Suppose cost per unit of labour and capital remains unchanged and the financial resources of the firm increase.

As a result firms new iso-cost line shifts to the right as A1B1. The cost line A1B1 touches IQ2 at point E2 which will constitute the new equilibrium.

Thus, every time the firm decides the expand the output level, it has to spend just extra money on the inputs. The figure shows that for higher output level IQ3 and IQ4 the firm all will respectively choose tangency combination E3 and E4 which minimize costs for given output.

If we connect the minimum cost combinations or producer’s equilibrium points such as E1, E2, E3 and E4 will obtain the firms expansion path.

It is also known as scale line because it shows how the entrepreneur will change the quantities of the two factors when it increases the scale of production.

The Expansion Path can have different shapes and slopes depending upon the relative prices of the productive factors used and the shape of the isoquants.

So friends, this was the concept of Expansion Path in economics. Hope you get the full details about it and hope you like this article.