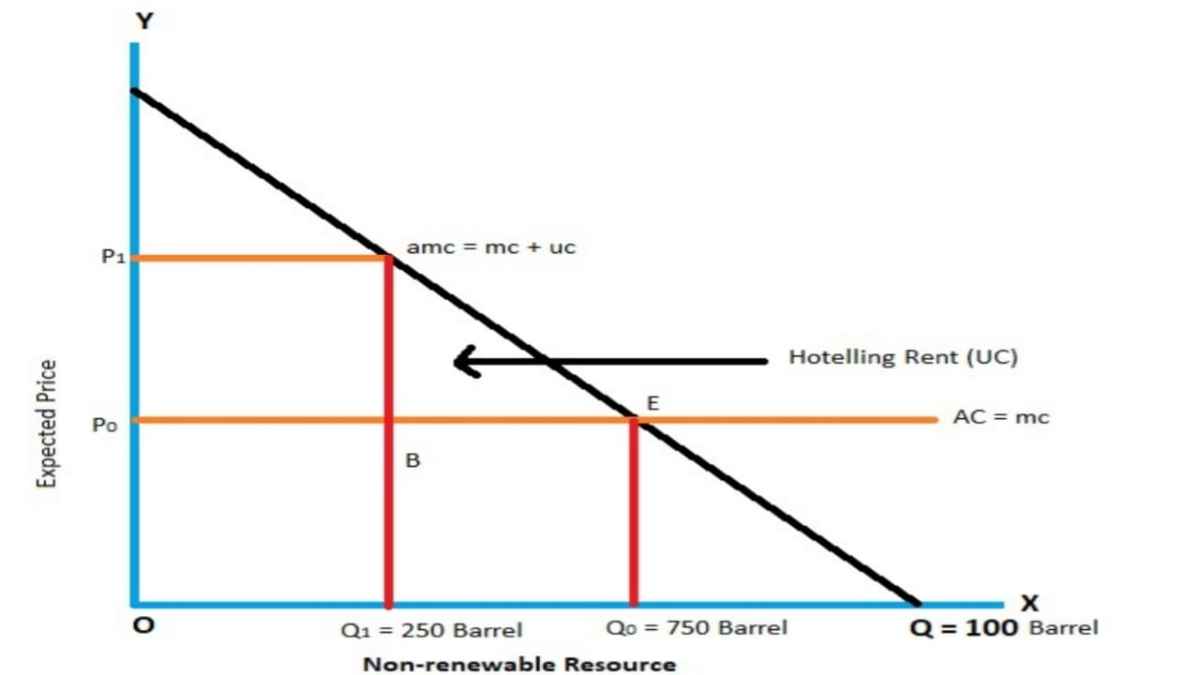 All resources of living and non-living provided by nature are called natural resources. In today’s article we are going to know about Optimal depletion of nonrenewable resources. So let’s discuss in details.

Therefore the extraction (pulling out) and sale of a unit today involves and opportunity cost. This is called user cost (uc). As for example- A barrel of oil extracted today is a barrel unavailable for extraction in the future. Hence we should take into consideration the concept of augmented marginal cost (amc).

This is called first order condition of optimum depletion as given by Hotelling. The current extraction rate by a private owner of a natural resource depends not only on the current price but also on expectations about future prices. Let us assume two periods-

Where, r is the discount rate. It is the user cost of his decision. It arises because he is faced with the alternative of selling it in the future per hence his return from the selling a unit today will be,

The producer will be better of selling his resources in the current period.

He will be better of by leaving the resources in the ground. Therefore, his optimum amount of current extraction is given by –

This equation gives us the first order condition of resource depletion. From equation (i) we get-

This is called second order condition of optimal depletion and is usually described as the fundamental equation of exhaustible (non- renewable) resources extraction as given by Hotelling.

Let us explain the theory with the help of following fig. 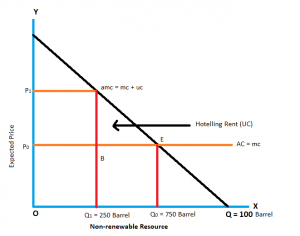 In the above figure, on OX axis we measure nonrenewable resource (crude oil) and on OY axis expected price. Extraction leads to exhaustion of the resource if mc = P rule is follow under perfect competition. The crude oil owner expects resource price may rise in future due to resource scarcity.

The minimum amount of expected increasing price in future is (P1 – P0) = uc. In the figure P1 > P0, the difference is called user cost (uc) or Hotelling rent. It may be written as P1 = P0 + uc. If future P1 > P0, the resource owner will be prepared to postponed resource extraction.

So friends, this was the concept of Optimal depletion of nonrenewable resources. Hope you get the full details about it and hope you like this article.