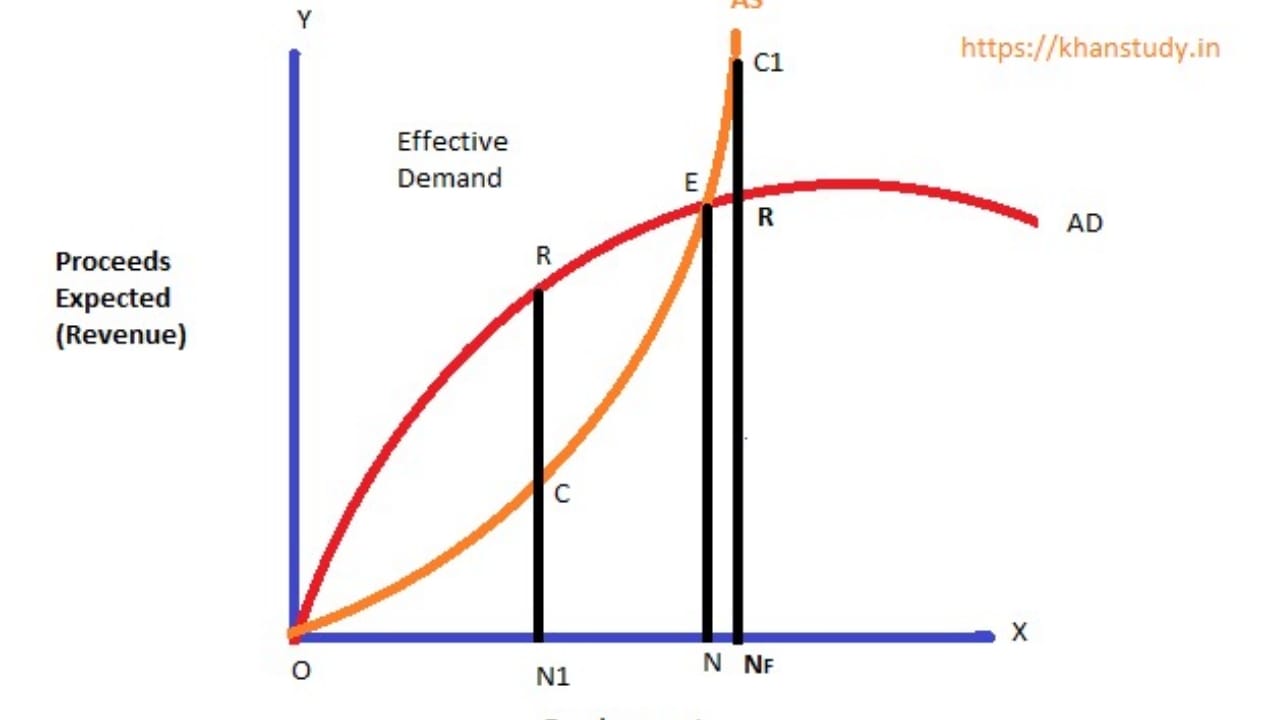 Hello Friends, welcome to my website Khan Study. In today’s article we are going to know about Keynesian Theory of Employment (Effective demand, Aggregate demand, aggregate supply). So let’s discuss this.

When an entrepreneur gives employment to certain amount of labour it requires certain quantities of co-operant factors like land, capital, raw materials, etc. which will be paid remuneration along with labour. Thus each level of employment involves certain money costs of production including normal profits which the entrepreneur must over.

The horizontal axis we measures the level of employment in the economy and the vertical axis the proceeds expected (revenue) and the proceeds necessary costs. T he two curves AD and AS intersect each other at point E. This is effective demand where ON workers are employed.

At this point, the entrepreneurs expectations of profits are maximised. At any point other than this, the entrepreneurs will either incur losses or earn subnormal profits. Following diagram shown Keynesian theory of determination. 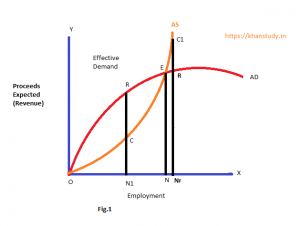 The point E, the point of effective demand, determines the actual level of employment in the economy which is of underemployment equilibrium of  the two determinants of effective demand. Keynes regards the aggregate supply function to be given because it depends on the technical conditions of production, the availability of raw materials, machines ete.  Which do not change in the short run.

If ONF is the level of full employment for the economy. It requires the raising of the point of effective demand. This is possible by raising the aggregate demand curve to AD1 where it intersects aggregate supply curve AS at E1.

This is the hew point of effective demand which provides an optimum level of employment to the economy. If the aggregate demand function is raised beyond this point the economy will experience inflation because all the existing resources are fully employed and their supply can not be increased during the short run, as is apparent from the vertical portion of the AS curve in Figure 2. 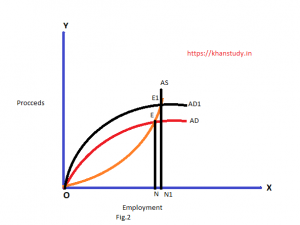 So friends, this was Keynesian Theory of Employment. Hope you get the full details about it and hope you like this article.