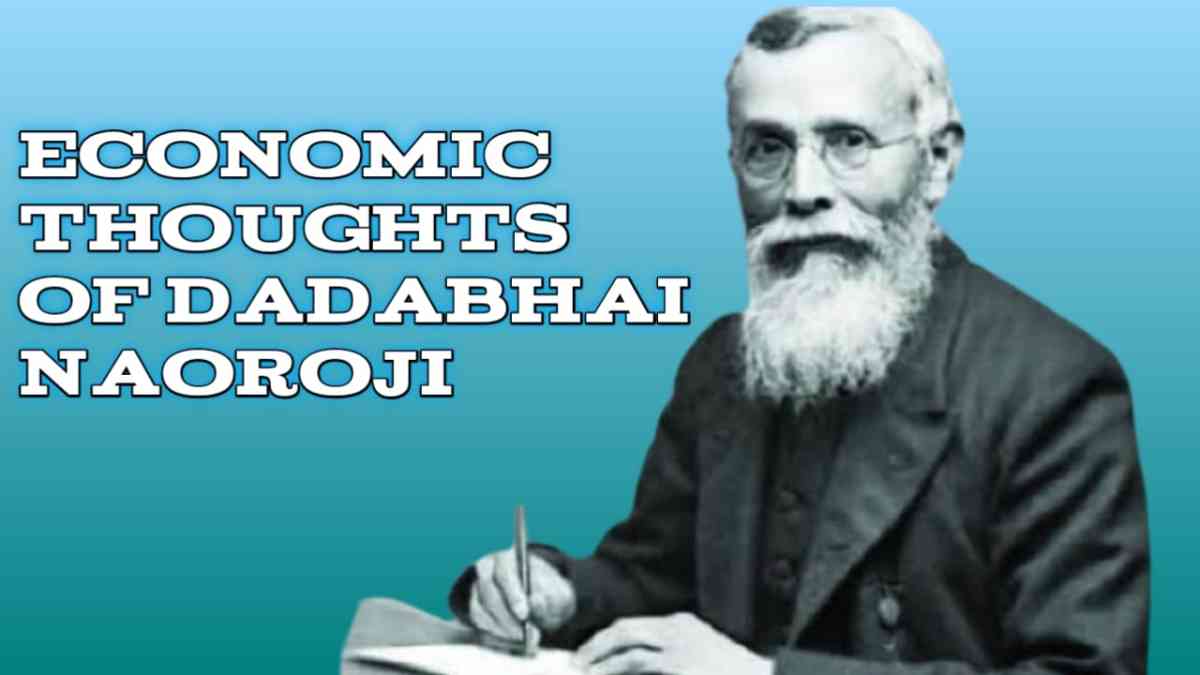 He was the first Indian to get a seat in British Parliament and the first Indian member of the Royal Commission. The major economic thoughts of Naoroji are contained in his book “Poverty and Un British Rule in India“, which was first published in 1901. So, let discuss about Economic Ideas of Dadabhai Naoroji.

The important Economic ideas of Dadabhai Naoroji are given below-

(a) Remittances of saving from India to England by the employees of the East India Company.

(b) Remittances to England by European employees for the support of their families.

(c) Remittances for the purchases of British goods.

According to Naoroji, the drain of the resources was primarily responsible for the poverty and under development of Indian economy. The drain included the profit of exports, freight and insurance. India had to bear the war expenditure of Britain.

The expenditure on maintenance of British army was also borne by India. There was also draining away of professionally skilled Indian people from India to England. This is what is regarded as the brain drain today. Naoroji called it a moral drain.

• National Income- Naoroji took initiatives to measure the per capita and national income of India during British rule. He stated that the figures and estimates on national income, published only in The Indian Economist were incomplete. He demanded the regular publication of per capita income of the British people in India every year.

He was not satisfied with the wrong estimation of national income in India by the British Government. The official estimate was not satisfactory. For year 1870-71, his calculation showed that India’s per capita income was only Rs.20, whereas it was Rs.420 in United Kingdom.

• Poverty in India- On the basis of his calculation of per capita income and national income Naoroji showed that the Indian economy was suffering from acute poverty during the British rule. A Common man’s position was much worse than that of criminals in the Jail.

• Public Finance and Financial Administration- Naoroji showed that the tax system of the British government was highly regressive in character. This was particularly true in case of salt tax. The tax rate was very high. It was 22 percent in India whereas it was only 8 percent in England. But the British government maintained that the Indian people were taxed lightly.

There was also heavy expenditure on the army and defense. In India people did not enjoy benefits from the railways. Indian money was spent on the home establishment of the railway officials who were living in England. In railway good jobs were meant for English people.

The interest charges on public debt in India were very high. The public debt of India was rapidly growing every year. The burden of the public debt fall on the common Indians. This is one of the Economic Ideas of Dadabhai Naoroji

• Reforms- Naoroji suggested a few reformative measures for giving a better shape of Indian economy. These are mentioned below-

(a) An equitable adjustment of financial relations between England and India.

(b) Permission to be given to India for the use of her own produce for consumption and investment.

(d) Public loans for investment in India at a lower rate of interest.

(f) Interest rate on public debt to be reduced.

(g) The administrative expenditures to be reduced to the minimum.

(i) Attractive capital for cultivating wastelands and supply of capital tor public programmes.

• Evaluation- Naoroji can be regarded as the father of Indian political economy. His works on national income estimate and drain theory still remain the authentic works of reference for further research in these areas. He was in favour of a welfare state for India.

Even in spite of the scarcity of statistical data. He was able to estimate India’s national income more or less correctly. He occupies a place of pride among the nationalist economists of India.

Mahadev Govind Ranade was born on January 18, 1842 at Nasik. He has been called as the father of the renaissance particularly in western India. His monumental work is “Essay on Indian Political Economy”, published in 1898 which contains all of his economic ideas.

• Poverty in India- He provided a number of factors which were responsible for the poverty in India during the British rule. These factors were conservative attitudes, uncertain condition of agriculture, and scarcity of capital, unskilled labour, un enterprising people, and drainage of resources and so on.

In India raw materials were produced only for export.  Agriculture was carried out traditionally. The land policies were defective. Lack of credit facilities stood in the way of industrialization of the country. The British government tried to convert India into a ready market for the sale of their produce.

• Role of State- Criticising the State policies, Ranade stated that it had been injurious harmful in India, both in respect of the development of agriculture and industry. He, thus, suggested that the State should take initiatives with such measures as may be helpful in the development of the economy of the country. He suggested the exploitation of the indigenous resources in the production of goods.

He pointed out that economic development is a function of many factors. Such as social, political, economic and institutional. He was also incline to have a planned economy for India which would in fact be a welfare state. He was in favour of a balanced approach towards population policy for the country.

• Evaluation- Thus we can say that Ranade was an economic thinker who gave wide publicity to the concept of welfare State and the organic unity of the state. Several writers have criticised his thoughts from different points of view but till today Ranade is considered as the revolutionary thinker of British India.

Gopal Krishna Gokhale was born at Kotluk in May, 1866. After his higher education at Poona and Bombay. He was appointed as lecture in the department of History and Economics at Ferguson College. He was the political Guru of Gandhi.

The main economic thoughts of Gopal Krishna Gokhale are mentioned below-

• Public Finance and Public Administration- Gokhale raised four important issues before the Welby Commission. These are-

• There has been a high rate of growth of public expenditure in India without a corresponding prosperity of the country.

• The charges between India and England are unevenly distributed.

• The control of finances should be in the hands of the Vice regal Council which will consists of a reasonable number of Indian representatives.

He refused this point. He said that the surplus was merely a monetary surplus which did not indicate any development in real terms. He pointed out that the surplus budget implied that the poor people have been more seriously taxed than what was justified.

He also concerned with the growing inflation of the Indian economy. He said that inflation caused acute sufferings to the poor people and an increase in the cost of developmental projects. Inflation also disturbed the currency.

• Economic Conditions in India- Gokhale noticed the pauperism in India. He gave evidence in proving the growing poverty in India and refuted the British government’s statement that India, there was a growing prosperity. He said that although there was a surplus budget, the tax burden of the people, which was an important cause of poverty, did not decrease.

• Suggested Reforms- Gokhale suggested a number of reforms for the better finance administration and management of the country and also for improving the welfare of people, The main suggestions are-

• He was in favour of industrial development of India.

• He pleaded for the introduction of permanent settlement in the matter of land revenue.

• Introduction of mortgage bank in India.

• Education for the child labour

• Famine relief for the affected areas

• Irrigation system for the agricultural lands

• Protective policies for the Indian industries

• Improving the living conditions of the workers

• Reduction in the tax.

• Evaluation- Gokhale is mainly known for his original views on Indian public finance-and financial management. His suggestions regarding the agricultural credit, extension of irrigation facilities and reduction of land revenue were most essential for the rapid economic development of the Indian economy.