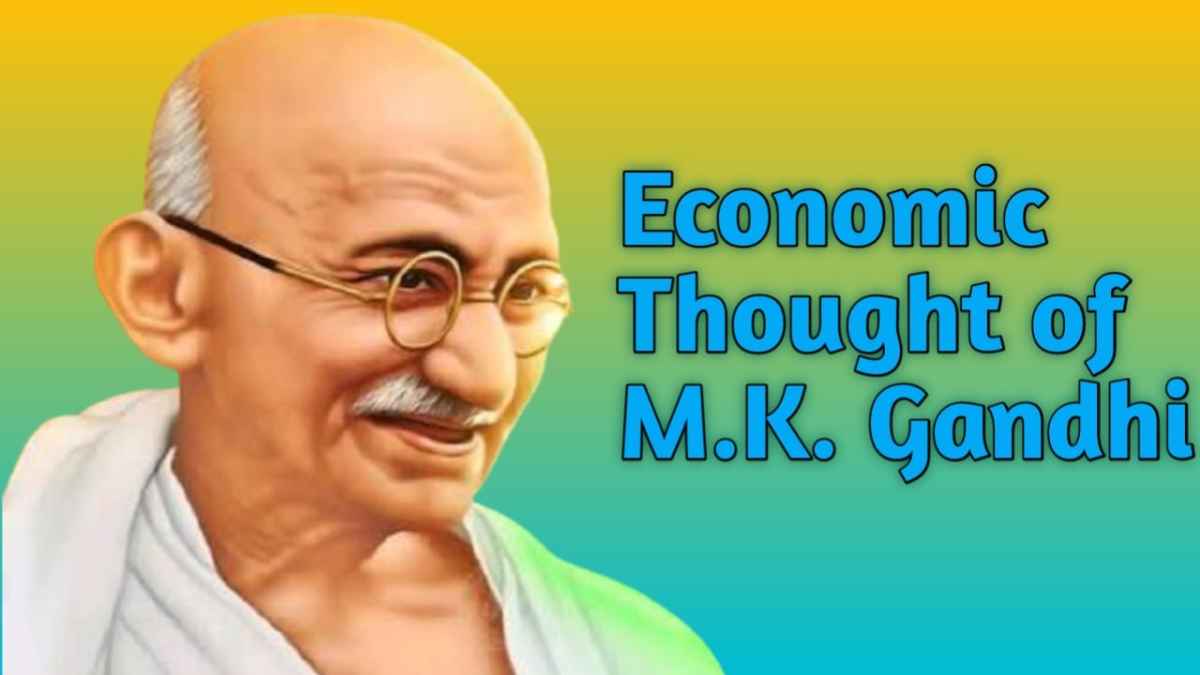 In today’s article we are going to know about Economic thoughts of Mahatma Gandhi (Discuss the ideas of M.K Gandhi?). So let’s discuss this.

Mohandas Karamchand Gandhi, popularly known as Gandhiji was neither an economist nor a politician. He was a social reformer and philosopher. His ideas were based on non-violence, truth, sympathy and love. The economic ideas of Mahatma Gandhi were found in various writings of Gandhiji.

The most important ideas of Gandhiji are discussed below-

He wanted to revive the ancient village system. In this connection he involved the system of village sarvodaya. He wanted to develop the small scale and cottage industries in the rural areas. According to him, the villages will serve as a part of a decentralised economy.

• Use of Machine- Gandhi was against the use of machinery because machinery makes labour slaves. It produces unemployment problem. Indian handicrafts were destroyed by the use of machine. He said that it is criminal to displace labour by introduction of power driven machinery.

But the activities of the trade union should be based on the non-violence and mutual co-operation. He advocated the participation of labour in the management process of the working places.

• Trusteeship Doctrine- Gandhi was against the concentration and misuse of wealth. He said that the rich peopte who have accumulated wealth should distribute it for maximising the welfare of the rest of the community. The rich people should consider themselves to be trustees.

However, no force shoulcd be used to get rid otf their wealth. Thus through the trusteeship the wealth of the rich people is used for the benefit of the entire community. It is a means of transforming the capitalist order of society into a socialist one.

• Sarvodaya- Garndhi used the word sarvodaya to denote Gandhian socialism which might become the foundation of Indian socialism. Sarvodaya refers to the welfare of all in the society-whether they are rich or poor. The sarvodaya movement is virtually a mixed form of spiritual and materialistic thoughts.

This philosophy spotlighted the fact that the simple living with minimum needs is better than the way of a modern life based on western culture. The simplicity is the symbol of happines.

Explain the basic features of the sarvodaya society?

The basic features of the sarvodaya society are-

• A person belonging to sarvodaya society is expected to be non-violent both in his thought and practice.

• Its member should have simple life and should minimise his wants.

• The rich people should consider themselves as the trustees.

• In this society village based cottage and small scale industries should be given adequate importance.

• The animal, human and plant life should be protected against the maximisation of machinery.

• Decentralization- The decentralizotion is an important concept of the Gandian economy. He was against the concentration of power into few hands. The process of decentralization distributes power equally in the society which in turn helps to develop the society.

• Non-Violent Economy- The entire Gandian economic thought is based on the concept of the non-violent movement. He was against all sorts of violence. According to him, violence can only spread the hatred.

Non-violence is the way to establish the peace and prosperity in the whole society. His ideas of trusteeship, sarvodaya, village reconstruction and decentralization of industries are based on the concept of the non-violence. For this reason entire Gandian economy is called the non-violent economy. (This is one of the Economic thoughts of Mahatma Gandhi).

• Khadi and Cottage Industries- Gandhi gave too much importance on the village based Khadi and cottage industries. The use of Charkha in Gandhian economics has been given much importance. To Gandhi it is not merely an instrument but an example of patience and self sufficiency of the common people.

The development of the Khadi and cottage industries are very much important because these industries use the- local resources efficiently. The large scale industries are profit oriented. Thus they are bad for the society because they lead to concentration of wealth and power into a few hands.

On the other hand, the development of the Khadi and village based cottage industries distribute the wealth equally to all the section of the society. Moreover these industries are free from any clash between labour and Capitalists.

• Swadeshi- Gandhi was in favour of the concept of Swadeshi. It means the use of domestic made product in place of foreign goods. Thus it helps us to achieve the self-sufficiency in the economic system. This idea is closely related with the concept of the sarvodaya, decentralization of industries and village reorganization.

So friends, this was Economic thoughts of Mahatma Gandhi (Discuss the ideas of M.K Gandhi?). Hope you get the full details about it and hope you like this article.