Hi friends, in today’s article we are going to know about the relationship between Short run and Long run average cost curve and Marginal cost curves. So let’s discuss in details.

The relationship between Short run and Long run average cost curve and marginal cost curves are explained below with the help of a diagram. 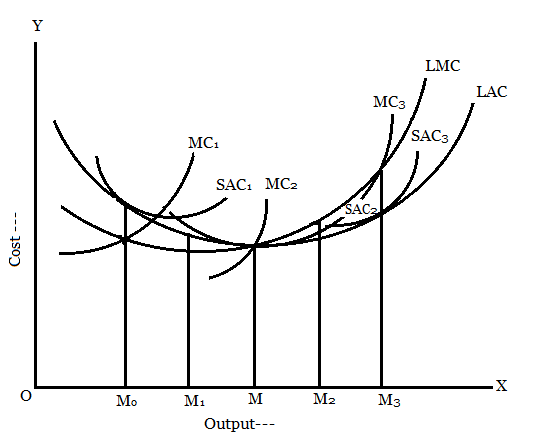 In the figure SAC1 and MC1, short run curves for the plant size designed to produce output Mo optimally. Since the short run cost curve would be tangent to the long run average total cost curve at this output, the two average cost curves are also tangent at this output.

At output level M the two average cost curves are tangent. The two marginal cost curves, MC2 and LMC are also equal at this level of output.

The relation of SAC, LAC, SMC and LMC can be summarized as follows –

When a firm selects a proper scale of plant in order to produce a given quantity of output then at this level of output short run and long run marginal cost curves are equal.

So friends, this was the relationship between Short run and Long run average cost curve and Marginal cost curves. Hope you get the full details about it and hope you like this article.

• Relationship between Investment and Rate of Interest