Keynes psychological law of consumption states that when income increases, consumption also increases but increasing consumption is less than increasing income and the part of income which is not consume is saved.

The main basis of consumption function is the psychological law propounded by Keynes. The law implies that there is a tendency on the part of the people to spend on consumption less than the full increment of income.

The Keynes law is based on the following assumption –

(i) This law is based on the assumption that the psychological and institutional complex influencing consumption expenditure remain constant.

(ii) The law is applicable under normal conditions.

(iii) The law operates in a rich capitalized economy, where there is no government intervention.

Let us now the main propositions of the psychological law of consumption, these are explained below –

(a) When income increases, consumption expenditure also increases but by a smaller amount. Symbolically,

(b) As increase in income is divided into some ratio between consumption and saving. It implies that a part of increasing income which is not spent in consumption is saved. Thus, symbolically,

(c) With the increase in income, both consumption spending and saving will either lead to less spending or less saving before. Thus symbolically,

Table and Diagram of Keynes Psychological Law of Consumption

Diagrammatically, it also be explained in the following figure – 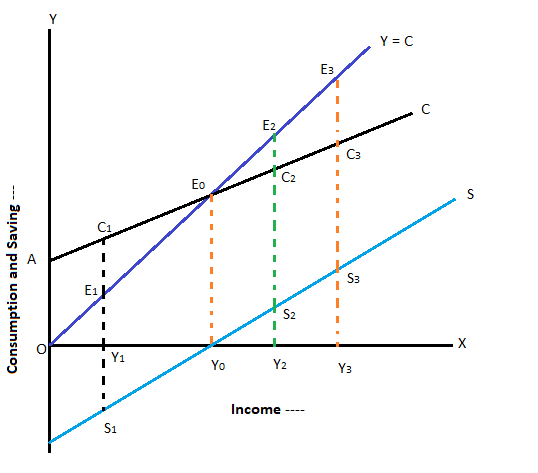 In the above figure, the 45° line is the zero. Saving line because at all points of this line income (Y) = Consumption (C) represents the consumption function which is drawn according to the psychological law of consumption.

It starts not from the origin ‘O’ but from point ‘A’ implying that even when income is zero, consumption is not zero because some basic needs of the people must be satisfied even if the income is zero.

Till point ‘E0‘ as shown in the figure consumption is more than income. The excess consumption expenditure over and above the income level is met up by utilizing previous saving which is called dissaving.

As for example at OY1 (= E1Y1) level of consumption is more than income. The excess of consumption over income is met up by dissaving of the figure S1Y1 (= C1E1). E0 is the break event point of the economy, because at this point consumption equals the level of income.

After this as income increase, consumption will also increase but not at the same part of income which is not consume is saved. In diagram at OY2 (= E2Y2) level of income. Consumption spending C2Y2 (Y2S2) reflects the amount of saving.

So friends, this was the concept of Keynes Psychological Law of Consumption. Hope you get the full details about it and hope you like this article.