Hi friends, in today’s article we are going to know about income consumption curve (ICC). So let’s discuss in details.

What is Income Consumption Curve?

Income impact can both be positive or negative. Income impact for a good is stated to be positive while with the increase in profits of the consumer, his consumption of the good additionally increases. In case of normal good income consumption curve is upward sloping to the right. 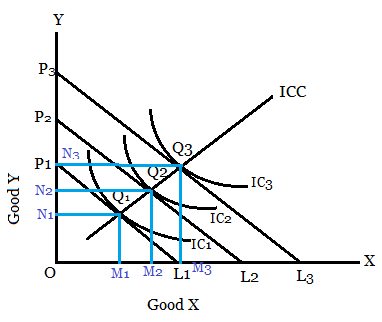 With given prices and a given money earnings as indicated through the budget line P1L1 the consumer is to begin with in equilibrium at point Q1 on the indifference curve IC1 and is having OM1 of X and ON1 of Y. Now assume that income of the customer increases. With his expanded income, he might be capable of buy large portions of both the goods.

As a result, budget line could be shift upward and can be parallel to the original budget line P1L1. Let us assume that the consumer’s money income will increase with the aid of using such an amount that the new budget line is P2L2 (Consumer’s earnings has improved by L1L2 in terms of X or P1P2 in terms of Y).

With budget line P2L2 the customer is in equilibrium at point Q2 on indifference curves IC2 and is shopping for OM2 of X and ON2 of Y. Thus a end result of the growth in his income of the consumer buys greater quantity of the both goods because he’s on the higher indifference curve IC2 he will be better off than before i.e. his satisfaction will increase.

If his income will increase similarly in order that the budget line shifts to P3L3, the customer is in equilibrium at point Q3 on indifference curve IC3 and is having OM3 of X and ON3 of Y.

If now various factors or points Q1, Q2 and Q3 displaying consumer’s equilibrium at various stages of income are joined together, we are able to get what’s called income consumption curve (ICC).

In case of inferior goods, indifference map might be such as to yield income consumption curve which both slopes backward (i.e., closer to the left) as in figure (A) or downward the right as in figure (B) of the following figure –

It might be observe from those figures that income effect turns into negative only after a point. It means that only at better stages of income, some goods emerge as inferior goods and up to a point their consumption behaves like the ones of normal goods. In figure (A) income consumption curve (ICC) slopes backward that is bends towards the Y axis.

This suggests good X to be an inferior goods, due to the fact beyond point Q2, income impact is negative for good X and as a end result its quantity demanded falls as income rises or increases. In figure (B) income consumption curve (ICC) slopes downward to the right past point Q2 bends toward the X axis.

This means that good Y is an inferior good due to the fact beyond point Q2, income impact is negative for good Y and as a end result its quantity demanded falls as income rises. 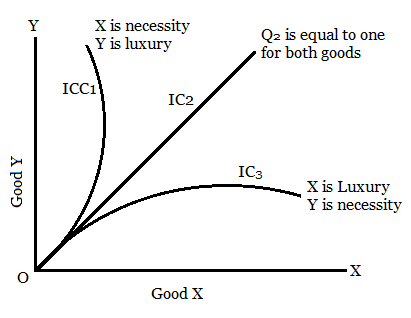 So friends, this was the concept of income consumption curve (ICC). Hope you get the full details about it and hope you like this article.