Hi friends, in today’s article we are going to know about the concept of Producer equilibrium with the help of total revenue, total cost, marginal revenue and marginal cost approach. So let’s discuss in details.

What is producer equilibrium?

A producer is said to be in equilibrium when he has no tendency to expand or to contract his output. At this level the producers earn maximum profit.

There are two approaches for determination of producer equilibrium –

(a) Under perfect competition where price remains constant.

(b) Under imperfect competitions where price falls with rise in production.

A firm or producer attains the stage of equilibrium when it maximizes its profits, i.e. when he maximizes the difference between TR and TC. Under this method there are two essential conditions for producer’s equilibrium are –

Under perfect competition each producer takes the market price of the product. Producers are price taker that is why price remains same at all levels of output. Under this market situations can earn maximum profit, when difference between TR and TC is the maximum.

Producer equilibrium diagram which is given below- 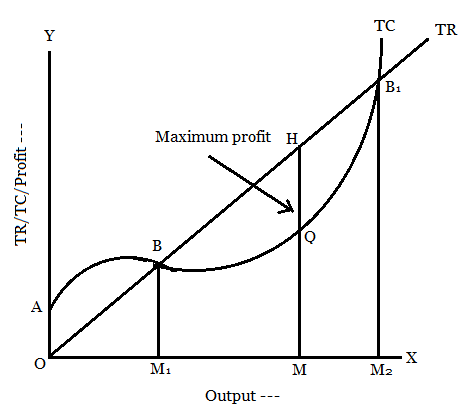 In the above figure output is shown on the horizontal X axis and total revenue and total cost are on the vertical Y axis. Since price is constant,  TR curve is a straight line passing from the origin. Producer equilibrium will be determined at OM level of output.

Because here the vertical distance between TR and TC curve is the highest. At this level of output, tangent to TC curve at point Q, is parallel to TR curve and difference between both the curves represented by distance QH is maximum.

When price falls as output increases, each producer aims to produce that level of output at which he can earn maximum profit, i.e when difference between TR and TC is the maximum. Let us now discuss producer equilibrium with the help of following figure- 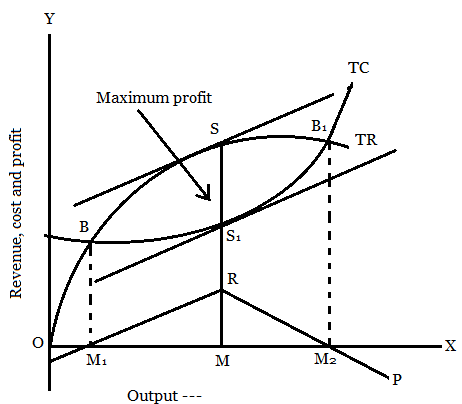 In the above figure at point B and B1, the TR and TC curves cut each other. These are the break even points where TR and TC are exactly equal and profits is zero. Thus the figure shows, at OM output, profit is maximum because the vertical distance SS1 between TR and TC curves is maximum at this level of output.

At this level of output, tangent to TR at point S is parallel to the tangent to TC at point S1 and difference between both the curves, represented by SS1 is maximum. Total profit curve P intersects the horizontal scale at M1 and M2, where profits are zero.

At point R (Peak point) total profit is maximum. Thus the producer obtain maximum profits at OM output since the condition of profit maximization is fulfilled.

According to this approach, producer’s equilibrium with maximum profit can be determined with the fulfillment of two necessary conditions-

When price remains constant, producer can sell his product at prevailing price fixed by the market. That is why AR and MR  remains same at levels of output. Both the AR and MR curves are coincide to each other. It can be shown with the help of following figure- 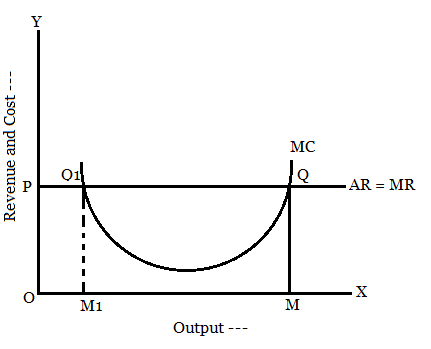 In the above figure, given the price OP, the average revenue curve AR and marginal revenue curve MR is a horizontal straight line. MC is the marginal cost curve which is U shaped. Producer equilibrium will be determined at OM level of output corresponding to point Q. Because at point Q, the following two conditions are fulfilled-

At point Q1, although MC=MR, but second condition is not fulfilled.

The equilibrium of the firm will be determined when MC=MR. It is explained through the following figure- 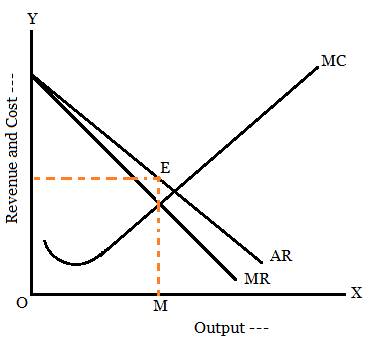 When there is no fixed price and price reduced to increase the output then MR curve slope downwards. In the diagram producer equilibrium will be determined at OM level of output corresponding to point E. Because at this point following conditions are fulfilled.

So friends, this was the concept of the Future Perfect Tense. Hope you get the full details about it and hope you like this article.

• Explain the Relationship between Average revenue and Marginal revenue