Hi friends, in today’s article we are going to know about the assumptions and definition of Indifference curve (IC). So let’s discuss in details.

What is Indifference curve?

Let us understand this with the help of indifference curve examples and the following schedule, which shows all the combinations giving same or equal level of satisfaction to the consumer.

As seen in the above schedule, consumer is indifferent between five combinations of apple and banana. Combination ‘P’ (1A + 15B) gives the same utility as (2A + 10B), (3A + 6B) and so on. When these combinations are represented graphically and jointed together, we get an indifference curve ‘IC1’ as shown in the following figure – 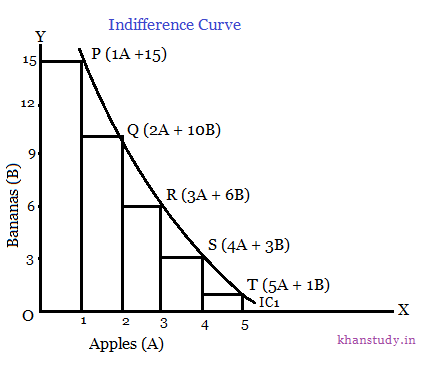 In the above diagram, apples are measured along the X axis and bananas are measured on the Y axis. All points (P, Q, R, S and T) on the curve show different combinations of apples and bananas. These points are joined with the help of a smooth curve which known as indifference curve (IC1).

Every point on IC1 represents an same or equal amount of satisfaction to the customer or consumer. So, the consumer is said to be indifferent between the combinations located on indifference curve ‘IC1’. The combinations P, Q, R, S and T are together known as ‘Indifference Set’.

What are the Assumptions of Indifference curve?

The indifference curve analysis or ordinal utility approach was given by J.R. Hicks and R.G.D Allen based on the following assumptions –

• Rationality of Consumer – The consumer is assumed to be rational and he aims the maximization of his utility with his given money income and market prices.

• Utility is Ordinal – It is assumed that the ordinal measurement of utility can be possible. It means the consumer can make comparisons of satisfaction. He can indicate that one combination is superior to the other.

• Diminishing MRS – The indifference curve analysis based upon the assumption that the marginal rate of substitution of one commodity for the other decreases as consumer purchases more and more units of the former.

• Homogeneity – In this theory it is assume that all the units of a given commodity are homogeneous or these are identical in every respect.

• Continuity – The IC theory takes the assumption that there are very small changes in the quantities of the two commodities.

So friends, this was the concept of indifference curve. Hope you get the full details about it and hope you like this article.