Hi friends, in today’s article we are going to know about Giffen Paradox and also know the derivation of demand curve for Giffen Goods. So let’s discuss in details.

What is Giffen Paradox?

Sir Robert Giffen analysed the behaviour of consumers in the case of inferior goods or commodities. If a commodity is inferior such as coarse grains, coarse cloth, etc. Consumer may reduce the purchase of commodity even when the price of commodity has fallen.

In case of such commodities the law of demand does not apply. The fall in the quantity bought of the commodity, when its price has fallen is termed as Giffen Paradox, after the name of Sir Robert Griffen.

In case of giffen paraox, since the law of demand does not apply the demand curve for giffen commodity slopes positively. 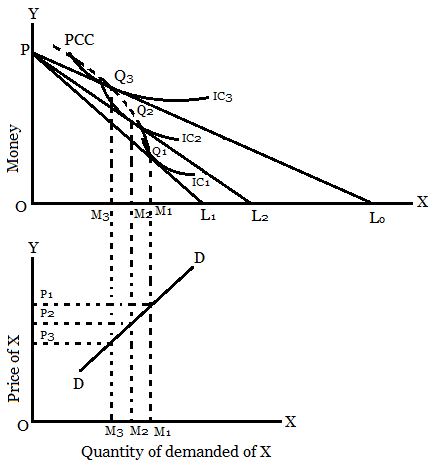 In the above figure, indifference curves of a giffen goods are drawn along with the various budget lines showing various prices of the good. Price consumption curve of a giffen good slopes bend backward. It is evident from the figure.

(The upper portion) that initially with budget line PL1 (or price P1) the consumer is in equilibrium at Q1 on the price consumption curve PCC and is purchasing (OM) amount of X good. As price of X falls, the price line shifts from PL1 to PL2 and PL3.

The consumer equilibrium is determined at Q2 and Q3. At these equilibrium positions Q2 and Q3, consumer buys OM2 and OM3 at price P2 and P3 respectively.

With this information we can draw the demand curve, as is done in the lower portion of the above figure. It will be seen from figure. (Lower part) that the demand curve DD of a giffen goods slopes upward to the right indicating that the quantity demand varies directly with the changes in price.

With the increase in price, amount demanded will increase and with the fall in price quantity demanded decreases.

So friends, this was the concept of giffen paradox. Hope you get the full details about it and hope you like this article.