Hi friends, in today’s article we are going to know about the Lewis theory of unlimited supply of labour, assumptions, diagrammatic representation, criticism, etc. So let’s discuss in details.

Prof. W.A. Lewis has presented a systematic theory of economic development with unlimited supplies of labour. Like the classical economists, he believes that in many UDC’s an unlimited supply of labour is available at a subsistence wage due to surplus population.

Prof. Lewis has studied the process of economic development in the dual or two sector economy with special reference to UDC. The marginal productivity of labour is negligible, zero or negative. Three countries have large number of pop” along with unlimited supply of labour.

The surplus pop” exists not only in agriculture sector but also found among petty traders causal workers and domestic servants. For e.g. let us suppose five workers are needed to cultivate one hectare of land.

Instead ten workers are working, then five are surplus, these are unemployed. Their marginal productivity will be zero.

Assumptions of Lewis Theory of Unlimited Supply of Labour

Prof. Lewis model is based on the following assumption –

• Dual Economy – W.A. Lewis believes that most of the UDCs of the world live under a heavy pressure of population due to rapid growth of population. In such economics, unlimited supply or surplus supply of labour is available at a subsistence wage.

According to Lewis UDC’s have the dual economy and hence can be divided into two sectors. (a) the capitalist sector (b) the subsistence sector.

The capitalists sector is that part of the economy which uses reproduceable capital and pays capitalists for the use thereof. The use of capital is controlled by capitalist sector, which hires the services of the labourers.

It may be either private or public. The average wages are quite high. The people are generally advanced, literate, sophisticated & skilled in the capitalist sector.

On the other hand, the subsistence is that part of the economy which does not use reproducible capital. In this sector, the output per head is quite low as compared to the capitalist sector. The average productivity of labour is low and people illiterate & unskilled.

Thus, there are use similarities between the two sectors and the development is lopsided. Under the above circumstances, the main problem is to provide gainful employment to the unlimited supplies of labour. It require greater attention in development and expansion of subsistence sector.

In order to provide employment to the unlimited supply of labour or surplus labour new industries can be set up or existing industries expanded without limit at the current wage rate by drawing up labour from the subsistence sector or the subsistence wage.

According to Lewis, the capitalist sector needs skilled workers for its expansion and the supply of this type of labour cant be regarded unlimited in these countries.

In this connection, Lewis argued that skilled labour is only a quasi bottlenecks a temporary bottlenecks, which can be removed by providing training facilities to unskilled labour.

• Capitalist Surplus – The main objectives of capitalists is to maximise their profits. The capitalist surplus is the difference between the marginal productivity of labour and the capitalist wage. The capitalists sector starts drawing labour from the subsistence sector on account of higher wages.

Their contribution to output also higher despite higher wages. In this way surplus is generated in the capitalist sector. Lewis termed this capitalist surplus is reinvested in the new capital assets by the entrepreneurs.

It leads to capital formation in the economy. This investment creates new jobs for the unemployed, labourers withdrawn from the subsistence sector.

In short, the process of economic development continues till the capital labour ratio rises and the supply of labour becomes inelastic, and surplus labour disappears. Thus, the capitalist formation depends on the capitalist surplus.

Working of the Model – Diagrammatic Representation:

Lewis theory unlimited supply can be explained in the following diagram. 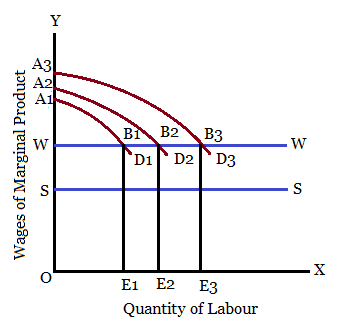 The supply of labour is unlimited, as shown by the horizontal supply curve of labour WW. At the start when OE1 labour is employed is the capitalist sector, its marginal productivity curve is A1D1 & the total output of this sector is OA1B1E1. Out of this labourers are paid wages equal to the area OWB1E1.

The remaining area WA1B1 shows surplus output. This is the capitalist surplus or total profit earned by the capitalist sector. As this surplus is reinvested, the curve of marginal productivity shifts upward to A2D2.

The capitalist surplus and employment are now longer than before being WA2B2 and OE2 respectively further reinvestment raises the marginal productivity curve and the level of employment to A3D3 and OE3 and so on, till the entire surplus is absorbed in the capitalist sector.

After this, the supply curve will slope from left to right upwards like an ordinary supply curve, and wages and employment will continue to rise.

Though Lewis model has provided deep perceptive analysis of the various problems of UDCs, yet it is not free from criticism. The criticism of Lewis theory of unlimited supply of labour are explained below –

• Unrealistic Assumptions – The theory assumes a constant wage rate in the capitalist sector. This seems to be unrealistic because the wage rate continuously rises over time.

• One side Theory – Lewis does not consider the possibility of progress is agricultural sector. Thus, it is one sided theory.

So friends, this was the concept of Lewis theory of unlimited supply of labour. Hope you get the full details about it and hope you like this article.

• Relationship between Population and Economic growth