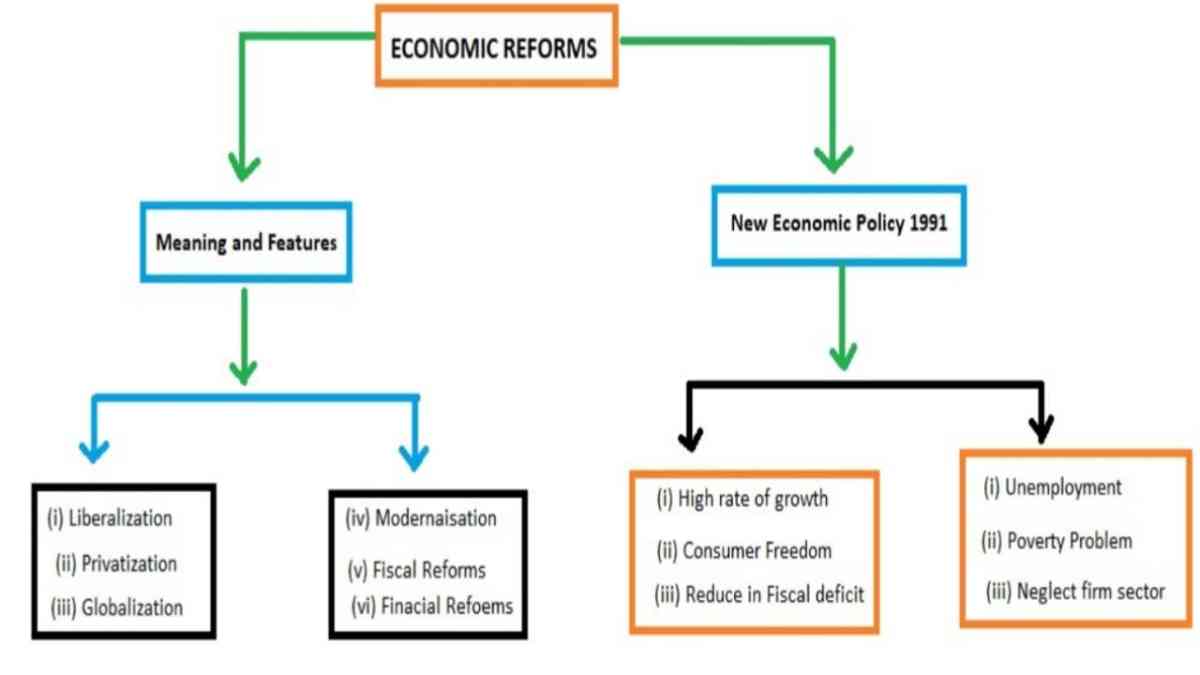 The entire world economy has been experiencing dramatic changes during late 80’s and 90’s. Economic reforms are nothing but some policy measures which change the socio-economic structure of an economy. So friends, In today’s article we are going to know about What is Economic reforms? (Economic reforms in India) . So let’s discuss in details.

The primary aim of economic reforms is to achieve competitiveness and over come the crises.

The 1st phase of economic reforms started in India during 1985. At that time it provided importance on improvement in productivity modern technology and fuller utilization of capacity. But the 1st phase failed to create expected result.

The 2nd phase of economic reform started in India in 1991 under the leadership of Dr. Manmohan Singh, the Finance Minister of India.

What are the main features of Economic reforms?

Under economic reforms private sector has been allowed to play a major role in respect of economic activities.

• Globalization – Globalization means opening up of the economy for world market to achieve competitiveness. Thus it indicate interaction of the country relating to production, trading and financial transactions with the developed countries of the world.

In order to assess the role of the industries, the govt of India introduced new policy in 1991.

• Fiscal Reforms – Another important features of new economic policy 1991 is to introduce fiscal policy reforms. The main objective of this policy is to reduce the fiscal deficit of the country.

• Financial Reforms – The new economic policy has undertaken various measures for the reform of its financial sector. This reforms includes the reform measure regarding banking sector, capital and money market.

• High rate of growth – Before globalization the growth rate of Indian economy was very low. It was just 4% per annum before 1991. But due to globalization it increases 8.6%.

• Consumer Freedom – The globalisation expanded the market of consumer goods. As a result consumers are new enjoying variety of products and services. It increases the volume of world class consumption.

• Decrease in the price level – Due to globalization, the annual rate of inflation has been reduced from the pick level. Huge foreign competition reduced the price level of different product and services.

• Neglect of firm sector – Economic reforms measures influence only industrial and service sector. It does not influence the firm sector of the economy. As a result the firm sector is suffering from several defects such as high price level, competitive and low development.

• Undesirable Social Consequences – Globalization means opening up of the economy for world market. As a result it imported some undesirable customs and social behavior or practices. These undesirable imported practices are against of Indian culture and tradition.

• Poverty Problem – The globalization process did not influence the poverty problem in different ways. Such as it creates the gap between rich and poor, developed and under developed areas.

What are the objectives of Economic Reforms?

• The public sector enterprises are facing the problem of low productivity and poor performance. In order to make necessary remedy to these problems economic reforms is necessary.

• The current economic reform made provision for increased flow of foreign investment. Which would help the country to modernise its technology and also for increasing its productivity.

• The Indian economy is facing the problem of rising fiscal deficit. In order to reduce the fiscal deficit, economic reform is necessary.

• The new economic reforms has faced the industrial sector from unnecessary regulation and control of the government.

• Another objective of economic reform is to modify the export sector. This is because through the development of export sector the country can earn foreign exchange.

• The major objective of of economic reform is to make the national economy or income more competitive.

So friends, this was the concept of Economic reforms 1991 in India. Hope you get the full details about it and hope you like this article.