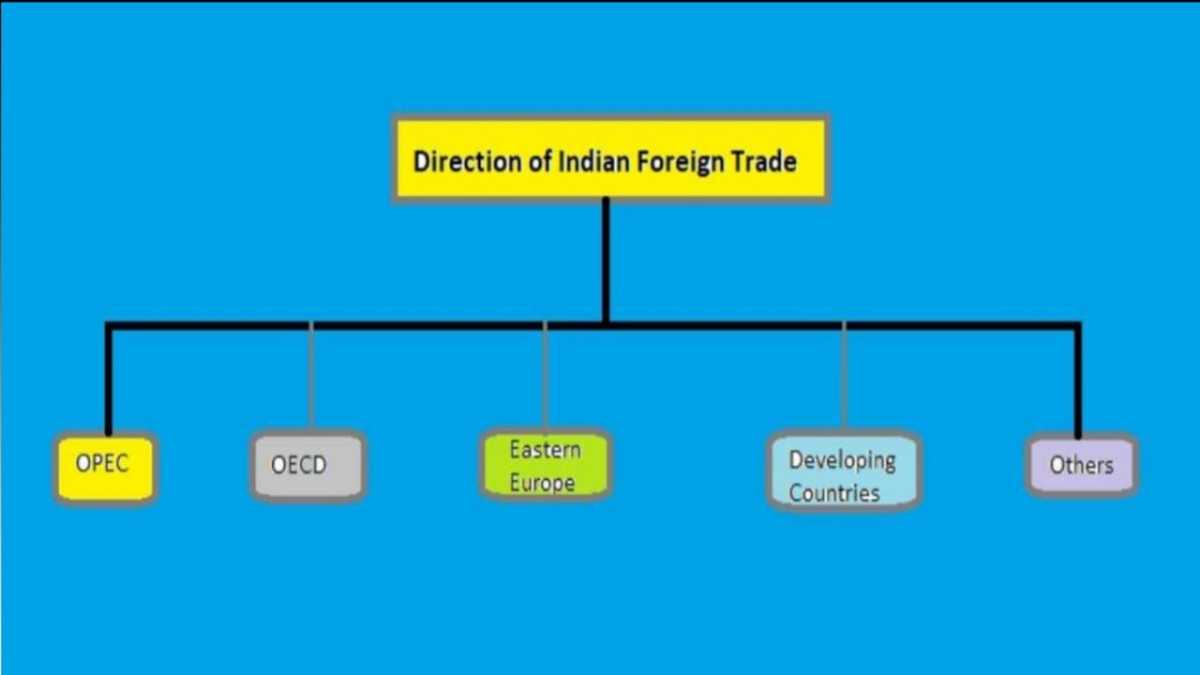 India’s foreign trade always shows a poor performance of the economy. In order to give a clear idea about India’s foreign trade, let us show its trend in different periods. In today’s article we are going to know about the Direction and Composition of Indian Foreign Trade. So let’s discuss in details.

The total value increased at a slow rate but it rise significantly during to post liberalization period. Thus we may comment that the new economic policy influence India’s foreign trade significantly.

Another important observation is that India’s foreign trade is very much import oriented. The table reveals that the value of imports increased from Rs.1025 crores in 1950-51 to Rs.1683467 in 2010-11.

The factors which were largely responsible for these imports include huge import of industrial raw materials, regular import of food grains and periodic like on it prices. Due to high import India faces deficit balance of trade.

Another very important observation is that India has been facing a very slow growth in respect of exports. During pre liberalization period, total value of exports rose marginally from 947 crores in 1950-51 to Rs.6711 crore in 1980-81.

Due to introduction of globalization policy the value of Indian export rewarded some increases but it was totally inadequate considering the growth value of imports.

The factor which is mostly responsible for this low growth of export include, inadequate export surplus, recession in developed country and adoption of the protective trade policy by the developed countries.

The composition is an important indicator of the pattern of trade. By the term composition of trade we mean the structural analysis of various items of export and import trade.

Thus composition reflects the specialization, diversification and nature of production structure of the country. The composition of trade changes according to the time and economic development.

From the above table it is clear that in India’s import trade capital goods occupied an important position. During pre liberalization period India import food, raw materials, capital goods and others items from the foreign country.

But after liberalization India imported huge amount of capital goods from the foreign countries. Agricultural development has made India self sufficient in the production of foods and other raw materials.

Due to introduction of economic reforms India’s export trade has increased its value composition wise. Therefore, we may comment that liberalization policy influences India’s composition of export trade.

Analysis of direction of trade reflects on regional direction of country’s foreign from where trade is originated. Indian foreign trade has changed its direction after the introduction of new economic policy in 1991.

Let us explained it with the help of following table-