Hi friends, in today’s article we are going to know about the barter system and also know the difficulties in barter system. So let’s discuss in details. 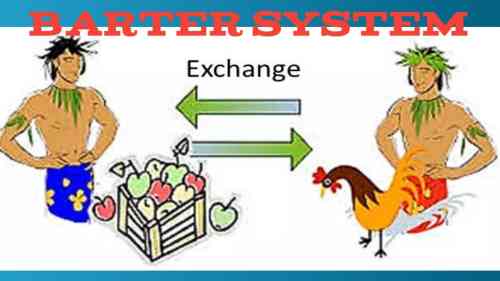 Barter system suffers from a number of serious difficulties, which are given as follows –

• Double Coincidence if Wants – Under barter system, there happens to be lack of double coincidence of wants. Exchange can be possible only if both parties or sides can spare, what other party want. Much time is lost finding out the right party. Sometimes, there may be no deal at all.

• Lack of Common Measures of Value – Under barter system, there was no common yard-stick to measure the value of different produces for the purpose of exchange. It is difficult to know, what quantity of one good is given in exchange for other. Because, whenever two parties make a deal, each moment or time, they will have to settle the fresh terms of exchange.

• Lack of store of Value – Under barter exchange, it was also difficult to store the value, because goods deteriorate sooner or later. Their storage may be costly, may be impossible or it may not be easy to dispose them of quickly without loss of something else is to be bought.

• Indivisibility of goods – Under barter exchange, a serious problem of indivisibility certain articles was arisen. Some articles were impossible to divide into small parts. So, that one of the trading party was compelled to give his indivisible item in full in exchange for other’s product.

• Difficulty in Borrowing and Lending – Under barter system, borrowing and lending of goods was also difficult. One of the two parties borrowed or lender has to face some loss. Because barter often invite controversy as to the quality of the goods and services to repaid or similarly, time of returning may not be suitable.

• No degree of Specialization – Specialization increased quantity and quality of any commodity produced. Therefore, more exchange deals have to be done. Under barter exchange or system, this is a great wastage in determining the rate of exchange between two products.

• Difficulty in Transportation – Under barter system, people had to travel from one place to another along with their product to get them exchanged with other goods. They had to face travelling problems, mishaps, time consumption and other risks.

• Difficulty in transfer of Wealth – Under barter exchange, the difficulty of transferring of a person’s wealth arises. When he intend to shift his wealth like house, car, property from one place to another, because it is almost impossible to find a person in another place, who can exchange his property or wealth.

So friends, this was the concept and difficulties or the problems of barter exchange. Hope you get the full details about it and hope you like this article.